Scott Brinker’s Marketing Technology Landscape Supergraphic is one busy chart.  According to Scott the 2015 version has nearly 1,900 companies across 43 different categories. Finding one’s place in this universe is a bit like looking for Waldo. 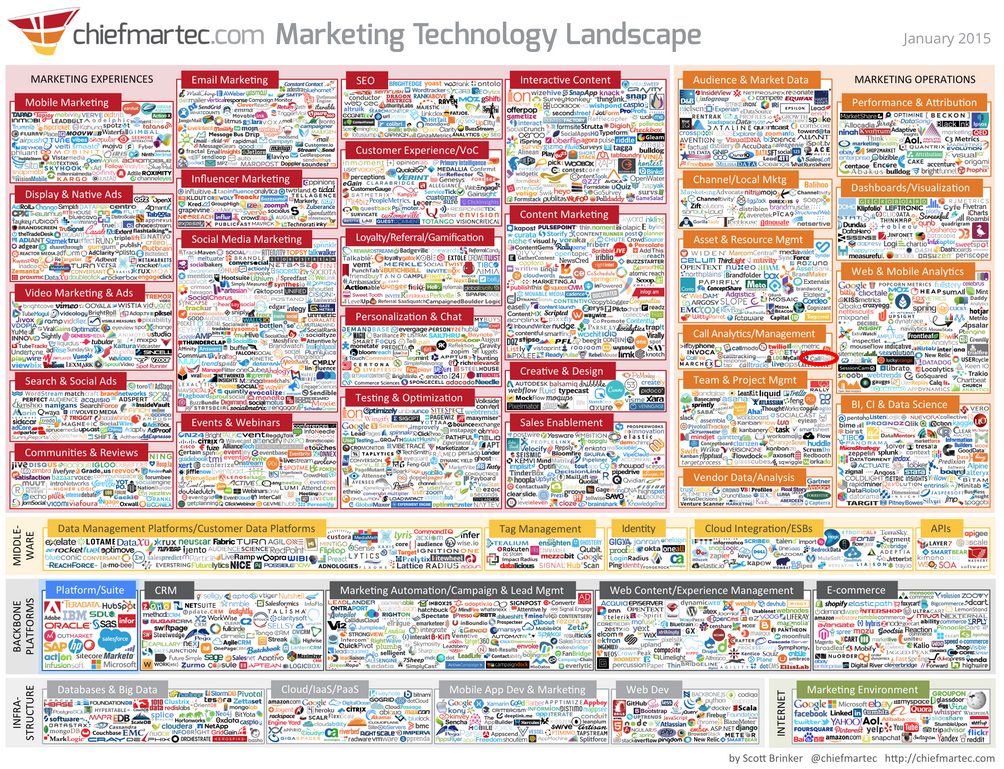 CallRail is in the orange Marketing Operations area in the upper right in the Call Analytics/Management category. Blowing it up makes it a bit easier to find.

And when you take a closer look at it call analytics really is not that crowded of a space. Basically six companies vying for a large and fast growing market. Not a bad place to be.

The Local Search Association Conference kicked off on Monday. Part of the program is the Ad to Action Awards which recognizes innovation and helps promote the products that best drive consumer actions (calls, clicks, store visits, etc.) for local businesses. CallRail is a finalist in the attribution and analytics category. This 40 second explainer video which was part of the CallRail submission is a good quick overview of the company’s value proposition.

If you are in local marketing not having call tracking is no longer acceptable. You have to know what makes your phone ring. CallRail does that.

CallRail offers phone call tracking and analytics for online and offline marketing campaigns. Their tagline says it all. Know what makes your phone ring. Something that is becoming increasingly important with the shift to mobile and online advertising.  It’s a big wave.

I met Andy Powell, one of the co-founders (Kevin Mann is the other), back when the company was a few people at Atlanta Tech Village and I was working for Half Off Depot. Engineered serendipity. Liked what he was doing and followed them a bit.

Late last year CallRail raised a $2 million Series A from Wain Kellum, Reggie Bradford, Canal Partners and BLH Venture Partners. Shortly thereafter I happened to run into Reggie and his family at the Shake Shack. He couldn’t have been more positive about CallRail so I decided to reconnect with Andy to see if he could use any sales and marketing help.

It happens that he did. We seemed pretty aligned from a values perspective. We decided to work together.

My number one objective in joining the CallRail team is to build a repeatable and scalable customer acquisition process so that we can double CallRail’s business in 2015 and then again in 2016. The CallRail team has created great momentum with a focus on friendliness and simplicity. Momentum so great CallRail could be the fastest growing Series A startup in Atlanta.

I am very excited to be a part of the CallRail team. It’s going to be a fun ride. 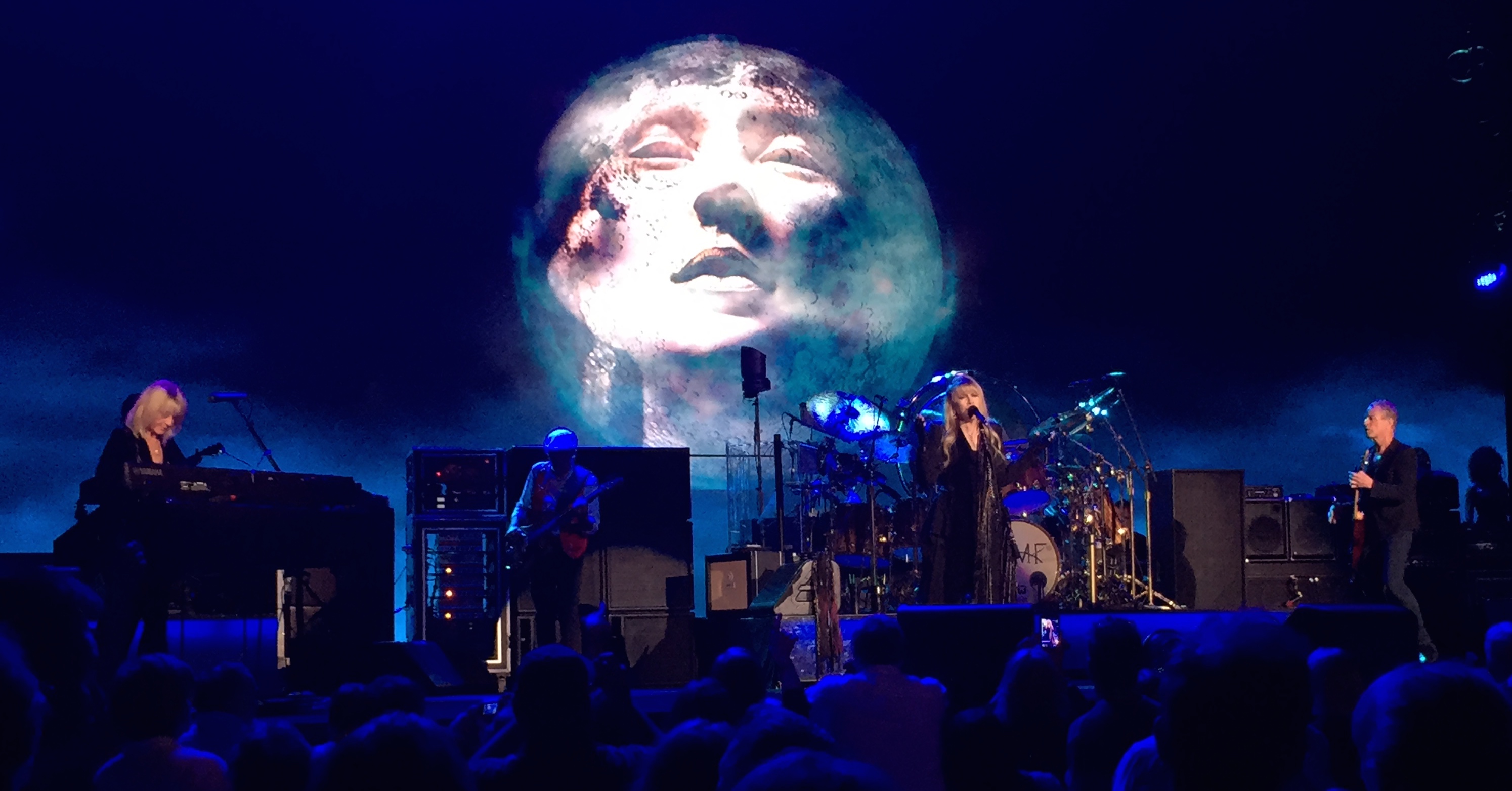 On the advice of my friend Dale Kirkland I decided to get my girl some decent seats to the Fleetwood Mac show last week. Never a huge Mac fan but Dale was right, they put on a heck of a show. The highlight to me was a story that Stevie Nicks shared leading into “Gypsy.” It seems that before Fleetwood Mac made it big and Stevie became rich she used to go to a store in San Francisco called the Velvet Underground.  According to Nicks the store had a marvelously painted floor. Hence the opening lines of the song.

So I’m back, to the velvet undergroundBack to the floor, that I loveTo a room with some lace and paper flowersBack to the gypsy that I wasTo the gypsy… that I was

She went on to talk about how the big lady rockers of the day, Janis Joplin, Grace Slick and the like shopped there, but at the time she could not afford to do so. One day while visiting the store she had a premonition. That she was going to become a star and would be able to afford the clothes that the Velvet Underground carried. Using herself as an example Nicks went on to encourage the audience to follow those feelings when they happen, to devote their lives to things they are passionate about. Which gave a whole new meaning to the next two lines.

And it all comes down to youWell, you know that it does

And while she did not talk about the next line seems to be a bit of  carpe diem encouragement.

Stevie is quite the little motivational speaker when she does not have her witchy freak persona on.

It all comes down to you.

Lighter Capital recently published a guide on how to choose the best funding path for your startup. It is pretty informative and outlines three funding paths that are potentially open for a tech startup. I find the guide particularly useful as less then 1% of all companies attract venture funding and it seems that nearly 100% of entrepreneurs seek out venture capital. Most companies do not raise venture funding and most entrepreneurs should not seek it.

There is a nice graphic in the guide that sums up three funding paths. 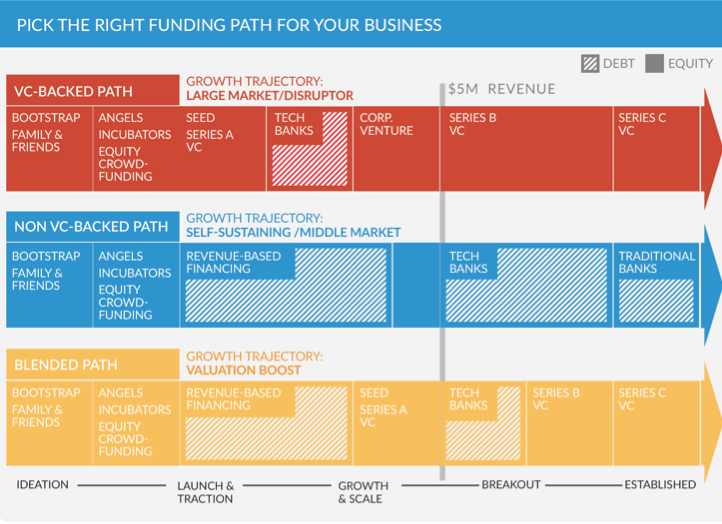 I don’t agree that companies generally raise a series A at launch and initial traction or that a series B takes place at $5 million in revenue. They both seem to come later to me.

The important takeaway from this chart is the non VC-backed path and revenue based financing. It is the path that the vast majority of startups will take and one that entrepreneurs should spend more time thinking about than pursuing venture capital.

After my post last week on Atlanta cracking the top ten in terms of regional startup capital first fundings Adam Harrell of Startup Atlanta reached out to me with other signs of the Atlanta startup ecosystem gaining traction and shared his 2015 State of the Atlanta Startup Ecosystem with me. It is embedded below.

Most notable are that Atlanta was ranked 10th in acquisitions from 2012 – 2104, and 10th on venture capital investment based on dollars invested.

The presentation is full of progress made in 2014 and bodes well for the future.

When David Cummings started Atlanta Tech Village his stated vision was to help make Atlanta a top ten tech startup city. We may be well on our way.

Ian Hathaway of the Brookings Institution recently published an article entitled “Early-stage venture capital: More regions get in on the action“. Interesting summary of what Ian calls “first fundings” or  initial round of professional venture investments in 2014. I played around with the results table a bit, basically consolidating areas like San Francisco/San Jose and Boston/Cambridge.  The resulting metro rank and number of deals per area is below.

Atlanta has cracked the top ten in terms of regional concentrations of early-stage capital in the United States. Granted there is still a huge concentration of capital going to the Valley. There always will be. But I think we are starting to see the results of David’s vision, being carried out by lots of different entities across the entire Atlanta metro area.

Mark Suster recently put up a video of a discussion that he had with Jeff Clavier on the lessons learned from Fab. It is embedded below.

In a nutshell they believe Fab paid too much attention to competition and did not stay focused on their core market market. Around the 3:20 mark things get really interesting when Mark starts talking about capital constraints. Capital constraints force focus, force creativity, and force innovation. Capital constraints also force you to ask harder questions about the viability of the business. Mark concludes that Fab’s issue was overcapitalization.

In his and Jeff’s point of view raising a large amount of capital increases investor expectations which in turn forces artificial growth and raises public expectations. The end result being growing too fast before a strong foundation is in place. Then things crumble.

Something to consider when big checks with high valuations are becoming more common.

Something that is garning a few headlines these days in the tech world is the Ellen Pao discrimination lawsuit against Kleiner Perkins. Pao is seeking $16 million in damages. Liz Gannes of Re/code has been live blogging the proceedings and for those with any interest in the inner workings of venture capital it’s fascinating.

The past two days John Doerr has been on the stand. Doerr is without question one of the most successful venture capitalist over the past 20 years or so. He funded companies like Compaq, Netscape, Symantec, Amazon, Intuit, and Google.

During a jury witness Q&A period with Doerr Judge Harold Kahn posed a question of his own. How do you learn to be a venture capitalist?  When pressed Doerr said the following.

My advice to people who want to be in the venture capital industry is to forget about it. To go be a successful entrepreneur. To have the experience of having to lay people off because you can’t make a payroll. That’s not something you can learn in a class. Once you have thatexperience, I think you should apprentice yourself to a successful venture capital firm. You should read the business plans. You should see how venture capital firms conduct themselves, how they give clear answers. And the hardest thing of all is to become a good judge of what makes a good entrepreneur or good CEO. So you develop a sort of pattern matching of what works. And you should seek mentorship.”

While Doerr seems to believe that venture capital is an apprenticeship trade and people read business plans the most fascinating aspect of his entire testimony is that as one of the most successful venture capitalists ever he is telling people that want to get into venture to go start a company, make it successful, and then get taken under someone’s wing. It may to be the traditional path but I am not sure that is the most common path these days. People that start and lead successful companies generally don’t like people telling them what to do. It’s part of the reason why there is an emergence of so many new venture funds.

So TechCrunch Pitch-off made its way to Atlanta the other night. The best thing to come out of that was not the event itself but an article by Christine Magee chock full of CrunchBase data. The most interesting of which was a chart of the most active investors in Atlanta based startups since 2010. 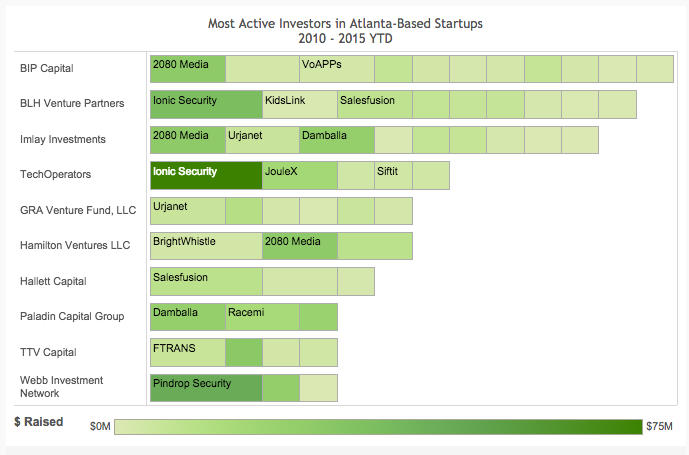 Not sure exactly how accurate this data is, let’s just assume it is Neilson correct, but there are some interesting tidbits to take away from it.

First and foremost BIP and BLH have been busy with a capital B. I am in the BLH office quite a bit and there are always people coming and going. Ashish is placing lots of bets. It turns out so many the firm is one of the most active in Atlanta over the past five years.

Another thing that surprised me is that eight of the ten firms listed are based in Atlanta. I would expect a bit more of an out of town presence given how entrepreneurs go fund fishing on the coasts. Perhaps the takeaway is to fish in your hometown.

It’s also nice to see Hallet Capital on the list. Jon is a silent type down to earth A team baller. All he does is deals. Successful ones.

Five years from now it will be worth looking back and doing a comparison with this list. There is a new wave of investors formed in the last year or so like Atlanta Venture, Mosley Ventures, Tech Square Labs, and Tech Square Ventures that due to their life cycle did not make the top ten cut this time around. My bet is that a few of them will be by then.